Get ready for Hallowe’en at our Spooky Fun Shoot!

Ghastly Juniors and Ghostly Seniors of all abilities welcome

Sinister snacks and dreadful (?) drinks will be available – a contribution to share with your fellow archery apparitions would be appreciated.

Dress up in devilish disguises and bring your carved pumpkins for display on the night - the judges favourite will be chosen at the end of the shoot.

Just write your name on the back of your vampiric vegetable so we can identify the cackling carver!

Results for this year’s club FITA/WA shoot are now available! Well done to all archers for some great shooting, and particularly Ryan H who beat his own club record!

The results from today’s Chairman’s Cup have been made available by organiser Phil Lees!

Congratulations to all archers for taking part, especially to the category winners.

You can download the results directly below or from the shoot page.

Just a reminder that our annual members-only Chairman’s Cup Competition takes place this coming Sunday at Runwell.
Please note that, although the shoot has also been referred to as a “Roast Dinner Shoot”, the Competition is open to all members whether or not you are partaking of the meal!
It’s not too late to enter, just register your intention to shoot with Phil Lees (e-mail:philiplees@btinternet.com  or mobile: 07597095544).
Calculation of Handicaps will not apply this year - there will be medals presented for all classes shooting (i.e. Gentlemen, Ladies, Boys & Girls).
The weather should be pretty good on Sunday – what better way to finish off the summer season?
Check out the Chairman’s Cup page for more information on this year’s shoot.

Another weekend of good weather, with RTAC archers participating in some interesting competitions near and far…

First, the Hanans were in action on the 26th over in Havering for the (ahem) 45+ Games. Throwing aside their Zimmerframes, their youthful vigor and vim propelled them to the top with Grant victorious in the Gents Recurve and Jackie (not to be outdone) taking honors in the Ladies Recurve category. A marvelous double for our dynamic duo, although Jackie was a bit put out by the inequality in trophy size… 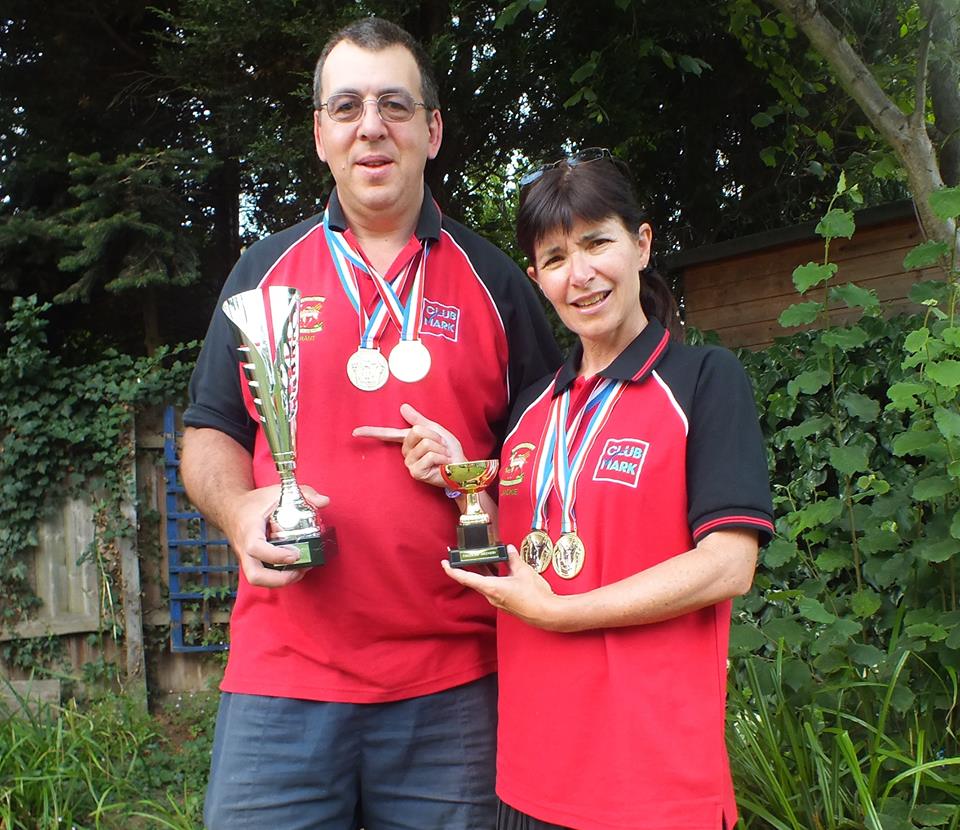 Rebecca Griffin was once again in action with her new (beautiful and perfectly coordinated) bow at the Kent Para Championships. Not sure how she placed (awaiting results) but judging by the pics on Facebook she had a great time: 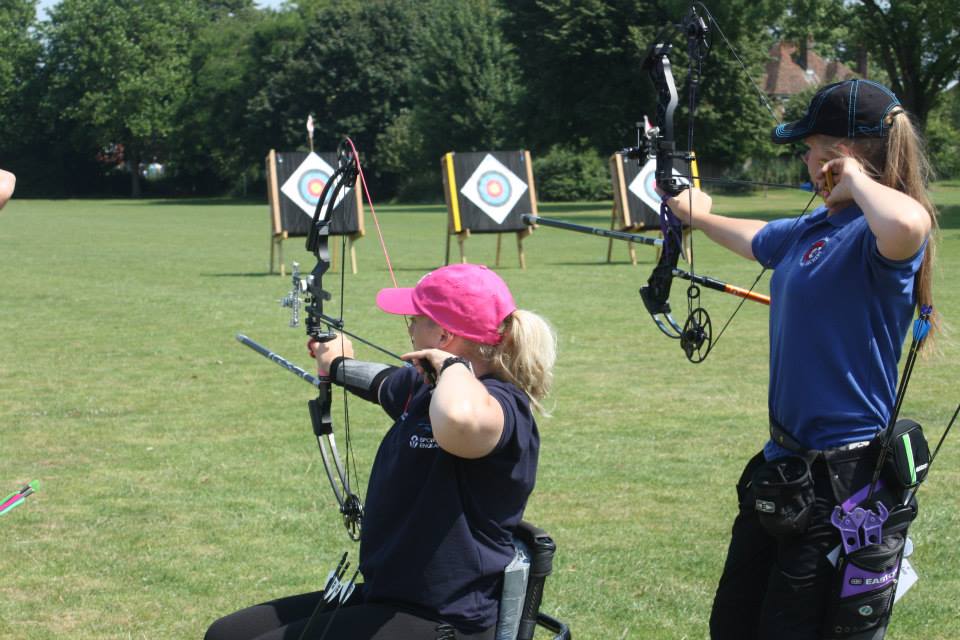 Closer to home, our annual club Clout competition at Runwell on the 27th gave everyone the opportunity to experience the joys of a very traditional form of target competition: launch your arrows high in the air and hope they fall somewhere near the marker 180yds away. Some excellent? scores were achieved by Iain Martin in the Gents recurve category and Daniel Ashenden in the Junior Boys Recurve, while Mia Coodye bagged 96 points in the Junior Girls. Nice to see Tracey W and Jacqui at the top of the Ladies Recurve! Jackie H placed third while shooting the gent’s 180yd distance – having cleared the ladies distance (and a tractor parked behind) during sighters, she felt safer shooting at the further target! Well done everyone! Results here: Club Clout Competition 2014

Meanwhile I spent the weekend down in Andover shooting one of the country’s largest competitions – the annual Andoba Double FITA/WA Star. Pretty simple, a full FITA/WA 1440 90m shoot on both days – winner with best combined scores wins. Saturday was very hot and sticky but I was happy with 1218 to finish 7th overall, alongside regular shooting mates Michael Judd and Ian Harris. The BBQ and beer afterwards was possibly the best meal I’ve ever had…Sunday dawned cooler with a strengthening easterly breeze making things a bit trickier but I scored 1204. My combined scores put me in 8th overall – not bad, particularly as I was shooting new arrows (and increased draw weight) for the first time. Full results here (.xlsx file).

The summer heat began to burn through this weekend as RTAC archers ventured near and far to compete in various tournaments, including our annual summer FITA/Metric club shoot. What a weekend it was!

Another top performance from our junior Red Ants who battled through the scorching heat today: the higher ground and light breeze saw the sight marks rise slightly.

Six made it on the day, each picking up an award – a good percentage of the medals once more.

Grace Tedore a silver in the Junior National…..480 points

Daniel Ashenden (508) a silver and Charlie Deeks (581) gold in the Junior National.

Bronze team trophy for Charlie, Daniel, Grace and James with a score of 1869.

Much to the disappointment of Mayflower I picked up the signed “Gillo” – Michelle Frangilli – cap in the raffle…..might have to donate that to the trophy cabinet at the club!

According to shoot organiser Neill Boatman it was a long but fantastic day, raising over £1000.00 for the appeal. West Essex intend to stage the shoot again next year, bigger and better: the Red Ants will no doubt be back!

Meanwhile, out in the tinder-dry wilds of Cambridge, some of the itinerant travelling archers of Essex found themselves at the Netherhall Archers World Record Status WA1440 shoot. Lauren Bann was shooting the Recurve Metric 3 round, with our good friends Rebecca Griffin of CTR shooting Compound Metric 3 and Thomas Boatman of West Essex shooting Metric 2. I (Tim) was up at the slow end with Paul Ramos of Braintree, James Howell from Mayflower and Clive Atkinson from Ascham shooting the WA1440 90m round. Clive’s wife Suzi was also shooting the Ladies’ 1440.

It was a super-hot, breezeless day – near perfect shooting conditions but something of an endurance test: I drank 5 litres of water and scurried back under my umbrella at every opportunity to get out of the searing sun.

Along with the heat, distractions appeared in all forms – Lauren’s mum Marcel:

It seemed to be one of the longest shoots ever, what with the train spotter walking along the shooting field and a escapee child running over the line…

We also had an old lady wander out of her garden into the overshoot buffer on the right hand side of the field too…she was  eventually persuaded to go back, but not without an argument.

The heat eventually dropped slightly as the shooting finished and the cleanup began. The long raffle was preceded by the ceremonial cutting of a massive cake, shared out to all attendees which provided a welcome sugar rush…!

Lauren, Rebecca and Thomas had apparently shot slightly below par (not surprising given the conditions and events of the day), while Paul R had trounced his PB by 31 points, claimed the 1200 Star badge and got the first of three all-important Master Bowmen scores. He was probably the only one to maintain his humour all day too – well done Mr Ramos. I was hoping to shoot 1200 for an MB score of my own but I was shocked and pleased to find I had made 1259: a Grand Master Bowman score apparently, enough to win the trophy (and a new club record).

Next year Netherhall are expanding the shoot to a two-day event with a 70m ranking round followed by Head-to-Heads on the saturday and the full 1440 round on the Sunday. I know Paul and I will return; hopefully we can send a strong RTAC contingent. It was a superbly organised and judged shoot: well worth the journey.

Phil Lees has released the 2014 Summer Programme for Runwell – something in there for everyone with Record Attempt club meetings, Junior competitions at home and away, Albion team league matches and the all-important club championships.

If you’d rather not join the battle during these dates, you can still shoot alongside as long as there’s no interference with the competition.

Here’s hoping we have a fantastic summer of high temperatures and even higher scores – looking forward to seeing you all on the field!

Team Captain Ian Bushell has suggested adding a little spice to our Club days at Runwell this year by focussing on the current Club Records.

He has checked over the current records and compiled corresponding handicaps appropriate to the scores – if you are anywhere near the handicap you have a good chance of shooting for the record. The plan is to tackle the easier/lower handicapped records first…

Results from our 2014 Portsmouth competitions have been compiled and are now available from the competition page!

We wish to thank all archers (and parents!) for attending our shoot – we hope you had an enjoyable, successful day!